I love holiday season. We might not have Thanksgiving in the Netherlands, but we do have Sinterklaas and Christmas.


The next holiday will be Sinterklaas. Long story short: Sinterklaas is this good old man who comes to Holland every year to celebrate his birthday. Children sing and put drawings in their shoe at the chimney before they go to bed. If they have been good, Sinterklaas will reward them with a present and sweets (pepernoten). The moral of the holiday is similar to Santa Claus, but Sinterklaas does not have elf’s, he has zwarte pieten who work for him.
It’s a typical Dutch tradition, it’s hard to explain the holiday to foreigners. Some might say it’s racist (Sinterklaas having these black men working for him), but that’s not it at all. Everything has an explanation and story to it, but in the end... it’s a tradition for the children. When I see my nieces and nephews getting excited for Sinterklaas, it brings back good memories from my childhood.
Around the age of eight or nine, the truth comes out and the children get to know that Sinterklaas isn’t real. Despite of this, families keep on celebrating the holiday. I still celebrate it with different groups of friends. We draw each other’s names and then we buy a gift and write a poem for that person. Sometimes you have to be creative and make a surprise to put the gift in it as well. I also have a group of friends that get together and play games to get the gifts that you have brought with you. It’s kind of difficult to explain now, but I’ll have two of these gatherings next week and will blog about it then.
It seems that I have been pretty good this year, because Sinterklaas has already filled my shoe twice! This is the advantage of living in a house with young kids I guess :-) 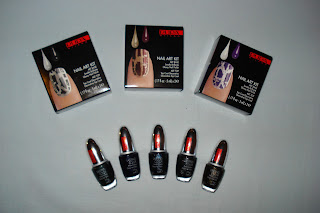 Sinterklaas and zwarte piet seem to know that I like to get creative with my nails so I got a whole bunch of nail polish.

I asked Sinterklaas for a blue Mini Cooper, but I think he misinterpreted what I’ve asked for. I got a whole bunch of mini things, but not a Cooper... It’s okay though, I like the mini hair straighter, lip glosses, mascara, hair spray and mirror.
Thanks Sinterklaas and zwarte piet!!
Love,
Bao-Nhi
Posted by Bao-Nhi at 22:14