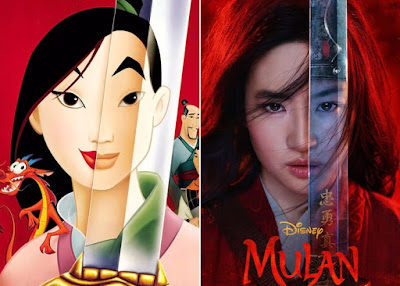 It is no secret that I am a Disney lover. The Little Mermaid has always been my favourite ever since I was six years old. Mulan became a very close second favourite once it came out when I was thirteen. Like most Asian-rooted kids, I already knew about the story of Hua Mulan. It was a myth that was told to (Asian) children, since there are not any Asian fairy tales (that I know of). Having Disney putting this myth into a fairy tale on screen meant a lot for a Dutch-born-with-Vietnamese-roots girl like me. Now the live-action movie has just been released and people have their opinion ready. Here is mine…

Disney movies are all about happiness. The ‘happiest place on earth’ vibe screams through the screen with all the music and characters. All Disney movies have the typical ‘Once upon a time… and they lived happily ever after’ storyline. Truth of the matter is that not all fairy tales have happy endings. This is not a good selling point for Disney, therefore they bend the storyline every now and then to keep the people in the ‘happiest place on earth’ mood.

Turning original Disney movies into live action is not always realistic because of the magical and singing part of the fairy tale. Having Belle, Jasmin or Aladdin breaking into song with a Beast or genie in the live action version is not natural, but we accept it because that is what we are used to from Disney. The live action version of Mulan does not break into song, there is no Mushu or Cricket and this seems to be off putting for some Disney lovers. But not for me though.

Mulan has got so many layers of depth that are relatable for me personally. The moral to bring honour to your family is a very high standard in an Asian household. It is something that has also been embedded in me. Being stuck between the responsibilities & duties of an Asian girl versus what she really wants to be or become. Going out of your way to be loyal, true and brave while portraying someone that you are not. In the end, Mulan conquered all odds and became a true legend.

I am very happy that the live action version of Mulan stayed close to the Asian roots. It is an Asian story, therefore it needs to be told in the Asian way. I grew up watching Asian saga movies, where people use chi and martial arts. Although I love Mushu and Cricket, they do not fit in the overall vibe of the true Mulan story. So well done Disney, thanks for another great movie!