Last week a question on the Dutch gameshow ‘Ik hou van Holland’ was: ‘What do you associate with the Netherlands?’. De 24 answers above were most answered by a random selected audience: Amsterdam, Johan Cruijf (legendary football player), de Wallen (red light district), drop (liquorish), drugs, being cheap, bicycles, cheese, windmills, wooden shoes, tulips... and so on.

I understand why all of the above is being connected with my beloved country, it’s partially true and partially stereotypical of course. However, last Saturday there was a shooting at a mall in the Netherlands. A shooting, that is something that I (and many others in the world) associate with America, not the Netherlands. A shooting with a dramatic outcome... so not Dutch!! 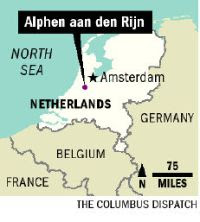 I was totally shocked when I heard about the shooting at a shopping mall in Alphen aan den Rijn (a city in the Netherlands). This is not the way I want my country to be portrait as the headline on the news of CNN, BBC, Al Jazeera etc. But as the day went by, more and more information about the shooting became available. The drama got worse and worse.
A 24-year old man decided to go to the mall with three guns (which he was licensed to own) and shoot around. After his coward act he pointed the gun at himself and ended his own life. Six innocent people died and fifteen are injured. My whole nation is in shock. This is not something that can or would happen in the Netherlands, it’s something that you only hear about when it happens in America...

No we are all left with the realisation that it DID happen in our country. Who is to blame? Can anybody be blamed for this tragic, besides from the coward shooter? Authorities in the Netherlands are investigating the situation. Questions are being raised about the weapon license that was granted to the shooter, knowing that he has a suicidal past. Could it have been prevented?

My country is in disbelief and the people who are affected by this lame act are mourning. Something we never even considered that could happen in our country, happened in our country.
It’s one of those things that you will never find reason to justify what happened or why it happened. All that we can do -and what I’ve been doing since Saturday- is to keep all who are affected in our prayers and thoughts.
Yes, there was a shooting in the Netherlands, but let me be clear: THIS IS SO NOT DUTCH!!!
Posted by Bao-Nhi at 22:09