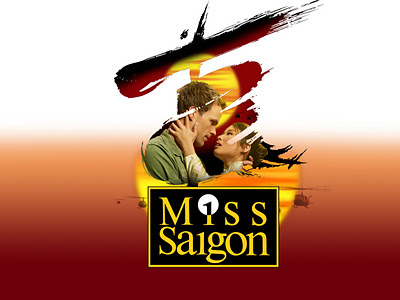 I'm not the biggest musical fan, because it's just odd to me that people start to sing during an act. Nevertheless, every now and then, I'm intrigued by a story and I can't help myself from going to a musical anyway. Miss Saigon is one of these stories and today was the day that I went to see the musical.

The reason why this musical intrigues me is probably because of my Vietnamese background. My family is from the South of Vietnam and my dad had to flee his country after the war, which is very similar to the story. In a way, I felt connected to the story and wanted to feed my curiosity by going to see the musical.

I went with my cousins, all born in the Netherlands with the same Vietnamese background. The only difference between them and me is that I can get very aggravated when the discussion between North, South, the war and the Viet Cong (communists) rises. I had nothing to do with all of this and wasn't even born during the war, but the legacy that has been passed on to me by my father and uncles (and the research that I've done about the Vietnamese war) has truly latched on to me.

I'll try not to spoil the plot for you, but it's a romantic story about an American soldier falling in love with a young Vietnamese girl during the war. They were estranged from each other when he had to return to the USA after the fall of Saigon in 1975. Later on, he discovers that they have a son and they find each other again.


I can relate to the story, because my mother was pregnant and carrying my sister during the fall of Saigon. And my father even fled his country during the same time as the main character did in the musical. My father did everything he could to provide for a (better) future for my family. This is a story that is not spoken about within my family (or within the Vietnamese culture for that matter). So seeing the images during the play, made my own history very realistic.

There were certain parts of the Vietnamese communist regime displayed (huge statue of Ho Chi Minh, communist flag, the Viet Cong etc.) in the musical and I literally felt my blood boiling because I was so aggravated... so yes, I got caught up within the story.
The other part that got to me was the part about the Bui Doi Foundation. It's a foundation for the children of Vietnamese women and American soldiers who are orphaned, been abandoned or neglected. This was a beautiful moment in the musical raising attention for these children. I just hope that the audience realise that this part of the musical is definitely not fiction.

All in all, it might 'just' be a musical, but in real life it tells the story of so many Vietnamese people (and American veterans!). Before the start of the musical a lady behind me made the comment: 'Miss Saigon is just like the Romeo & Juliet story. The only difference is that this happens in Vietnam and not in Italy.'. This comment stuck with me and I just hope that the lady realises that Romeo & Juliet is fiction and the story of Miss Saigon symbolises the story of millions of Vietnamese people all over the world, including mine.

So to the cast of Miss Saigon: thank you for telling the story and made me respect my roots even more.
To my parents: thanks for the sacrifice that you've made that has given me the life that I have today!

Signing off... still as a Dutch, but one with more respect and grown admiration for her Vietnamese roots!
Posted by Bao-Nhi at 01:05