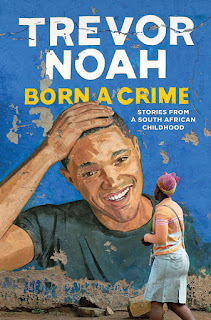 A good friend told me that I should really REALLY read the book Born a Crime. So I did because of the second REALLY. You don’t understand… whenever somebody from South Africa tells you really REALLY, they really mean REALLY.


Born a Crime has kept me up last night. The book contains stories about Trevor Noah’s childhood in South Africa. It is so clever written and I could just picture his life in my head. Some of the stories were really heartfelt, but the dosis of humor kept it light, despite of the serious matters that came across. The book is about his life, but I feel connected with many of his stories. I could literally imagine the different conversations and South African accents coming to life in my head… something that I miss dearly.

What I read throughout the book is him not understanding why others cannot label him. His mother is Xhosa and his father is Swiss, which technically makes him coloured in South Africa. But how do you define somebody by the colour of their skin? This seems to be the everlasting questions in our world. Trevor and I were born in the same year and just like him, I have never understood why people ask me where I’m from. I was born and raised in the Netherlands, but have Asian looks because of the heritage of my parents. Whenever I tell people that I am Dutch, they always ask me where I’m really from. I confuse them even more when I open my mouth and my British or American accent (depending on my mood) comes out. On the otherhand, to the Dutch people I will never be REALLY Dutch either. The year that Trevor reconnected with his dad in Cape Town, was the year when I first visited the Mother City. The place that instantly felt like home. It was the first place ever where people thought that I was a local and were surprised to find out that I was Dutch.

There was another thing that I could relate to with Trevor: his views on religion versus the view of his mother on hers. It is no secret that I believe in God, but the way I interpret my faith is often different from most people. There is more in life than good and bad, there’s a lot in between as well. This between space is mostly my logic reading the lines in the Bible differently and let it out there for discussion.

I’ve gotten to know Trevor Noah from the Daily Show and instantly fell in love with his South African accent and sense of humor. I’ve seen a couple of his stand-up shows, which were all hilarious. He seems like a very bright, intelligent man with wise insights on life. Now, with this book, we get a glimpse of his childhood. What is astonishing to me is that he handles everything in his life, even all the adversity, with so much positivity. That is something that I will take with me from getting to know him through this book.

I rarely read books, because it is hard for me to put a book down. I have to read it start to finish and this often complicates my sleeping battles at night. But for this book, it was really REALLY worth it. I have even taken the time to write about it on my blog, which I haven't done for six months. So if you have the chance, do yourself a huge favour and pick up a copy of Born a Crime.

And to mister Noah, thank you for sharing your story with us. I cannot wait to see what else you have got in store for our world!