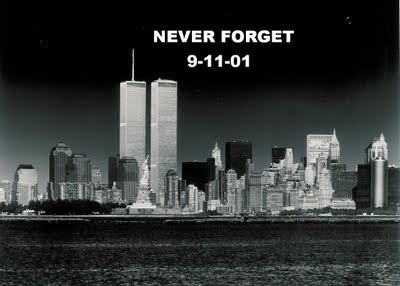 As the entire world is looking back on what happened ten years ago, I think back at that 11th of September as well. 9/11 has had a huge impact on New York, the United States, the world and it’s marked as an important chapter in the history of my life.
Every year I can’t help myself and watch every single documentary that is aired on TV about 9/11. Ten years have gone bye and watching it still saddens me. It's one of those things in history where everybody remembers where he or she was when they heard it.
I was in Driebergen at a camp for all the class representatives of my high school. On the second day of the camp, my best friend and I went in to town to do some shopping and just goofed around like we always did. We stopped at the local snackbar (which is a fast food joint in the Netherlands) to get some fries. The TV was on and we saw images of a plane crashing into a building. Because we were goofing around, we didn’t really give it any thought. To be quite honest, it’s so surreal that I probably thought it was a movie or something.
Back at the camp, we were informed by the teachers about what happened. As the teachers looked after the younger students, the student council and I gathered more information by watching the news. As we were glued to the TV, I desperately tried to get a hold of my cousin who was staying in New York at that time. After trying for over an hour, I still couldn’t get a hold of him and I started to panic. My mind played tricks on me by going through the worst case scenarios.
In the end, my cousin turned out to be fine. I came home from the camp and got myself hooked to the television. I just couldn’t wrap my mind about what had happened. The images seemed (and still seems) so unreal. Just the thought of losing my cousin made me go nuts for a while, can you imagine how the family and friends of the nearly 3000 people whom have passed away on 9/11 feel? As we get reminded in September every year, they have to live with this loss every day of the rest of their lives. As this day is engraved on my mind for eternity, we must somehow try to continue life like it was before September 11th 2001. Our world has changed so much since this day, not always for the better unfortunately. Life after 9/11 seems to be more violent, people distrusting each other and one after another war is being declared. We need to change this and go back to how it was before 9/11. We need to make all the lives that have been lost count for something.

New York, the city that I love so so so much, was hit in its heart, but she overcame this. It’s still as beautiful as it ever was. As the world is getting ready to remember what happened ten years ago and celebrate the memory of the lives that have been lost, let us all send our thoughts and prayers to their family and friends, because there’s no doubt that today will be bittersweet for them.