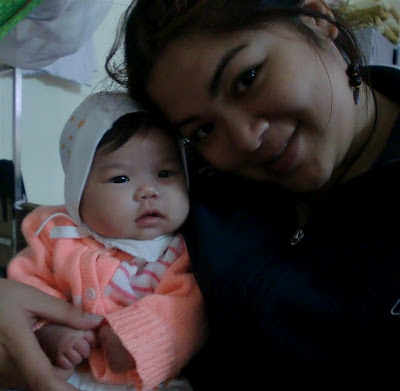 I'm blessed to have met so many brave, strong and admiring children. One of them has been on my mind a lot these days so I've decided to devote my Throwback Thursday to her: baby Nha.


I've met baby Nha when I was working at the Hai Duong Welfare Centre in Vietnam two years ago. Although she was just a baby, she taught me what the real definition of determination is. Baby Nha was a baby orphan who was 'dropped' in the garbage by her parents. Somehow she survived and ended up at the Welfare Centre where she could be loved by the foster moms and me. When she was just four months old, she turned very ill. I had to rush her to the hospital… it was a night that is engraved in my mind and heart for eternity.

I witnessed two babies pass away, something that was hard on me, but even more unbearable for the parents involved. Thinking about this really sends shivers down my spine again. The only good thing about this story was that baby Nha fought through the night and survived!

The next morning was the last time that I got to hold her and see her pretty face. She got to return to the Welfare Centre a couple of days later, but by that time, I was back in Hanoi to continue my work there. Four months later, I was informed that a young couple from France will adopt her. That's was the last thing that I ever heard of her.

I don't know whether her name is still Nha or not. All I know is that she is a two year old French citizen now. My wish and hope for her is that she's loved tremendously by the couple who adopted her. That they are giving her the home that she literally has never known and had before. She deserves nothing less than that.

She won't remember me, but I will never forget baby Nha. Her fighting spirit to survive has found its way straight to my heart.  She will remain in my thoughts and prayers for infinity.

There’s a thin line between life and death.