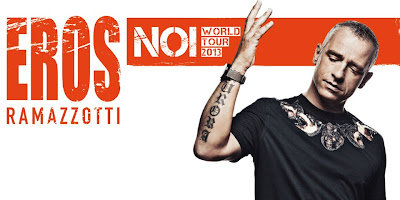 I just got back from another great night at the Ziggo Dome. As I gained an overdose of adrenaline after yesterday's show, I'm now left with a mind that is reminiscing about my past. I just saw my all time favourite singer Eros Ramazzotti perform for two magnificent hours.

Most of my friends are pretty surprised when they discover that I'm a huge fan of Eros his music. It all started when I was twelve years old. I was in the first year of high school and was very eager to do well in school. My only problem was (and still is) that I can't study when it's silent. I need background noise, music or anything that makes sound. Whenever I played music, I got distracted and I used to listen to the lyrics or sing along with the songs. I thought that it would help if I listened to music in a language that I couldn't understand.

During that time, 'Più Bella Cosa' was in the charts and I liked the song. Without giving it any other thought, I went to the music store and bought Eros Ramazzotti's latest album: Eros. (Yes, during that time people actually went to a store to buy CD's!)


This is when mister Ramazzotti concurred my heart. I totally fell in love with his voice. I didn't understand any of the songs, but it got to me. And this is what music is supposed to do. Music that touches you, touches your heart and soul. This album was played at least ten times a day throughout my high school years. (Seriously not exaggerating here!)


The first time that I got to see Eros perform live in the Netherlands was about ten years ago. I was absolute blown away, because what he has given me through his CD was multiplied by A LOT during this first concert. There is something about his voice that just gets to me. The gift that he has to transfer a song to his public is something that I cannot explain. I have been to every single concert of him in Holland ever since.

It amazes me how little he needs to give a good show. As last night was full of spectacular things like flying around the Dome, tonight was all about simplicity. This simplicity was even noticeable in what he wore: jeans and a t-shirt! ;-) He only needed a mic and his voice to get the 17.000 people mesmerized.


Throughout the last 16 years that I have been listening to his music, I have never looked up the meaning of the songs. I don't speak nor do I understand Italian, but I still like to sing along with the songs. Johnny and my cousin used to laugh at me all the time, because they are/were quite familiar with the Italian language and my pronunciation obviously sucks (to say the least).

It was great to share this evening with Johnny and I loved that Kaj came along too. They have gone out of their way to arrange this weekend for me. Fortunately, the weekend is not over yet! Tomorrow is another fun filled day... I'm headed to the science museum with my niece during the day and going back to the Ziggo Dome to see the fierce Mrs. Carter in action.