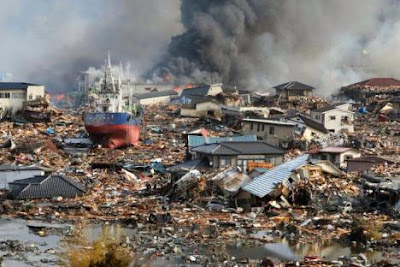 My thoughts and prayers have been with Japan and those who are affected by the tsunami since last Friday. The footage shown on the news have put me in awe. It’s hard to imagine how Japan will ever overcome this disaster, but we need to all come together and rise to the occasion to help as much as we possibly can.
When I heard about what had happened in Japan, my mind immediately drifted back to 2004 when a huge tsunami struck the Indian Ocean. It’s not clear how many live are lost because of last Friday’s tsunami, but in 2004 over 230.000 people from fourteen different countries lost their lives. I remember sitting in front of the television for days just trying to comprehend what really happened. But how can you? Nature spoke and there’s really nothing us vulnerable human beings can do against it.
﻿
﻿

In 2007 I got the chance to go back to India and visit the area that was struck by the tsunami. Three years had passed and the damage was still very much visible. Many people were still living in tents and rubble was lying around everywhere. The thing that struck me most about my visit to Chennai (better known as Madras) is the positivity of the people. They are all so confident that things will get better.
This is my wish for Japan: for them to be just as positive as the people who were affected by the tsunami in 2004. I wish them a lot of strength to overcome this disaster. Alongside with a lot of faith, hope and love from all over the world, I’m confident that they will overcome this. The road will be long and it won’t be easy, but they will get there one step at the time.
Until that day comes, we should do our part and help as much as we can. If you can’t help out financially or physically... than you can always do it through thoughts and prayer.
﻿﻿
Posted by Bao-Nhi at 12:16