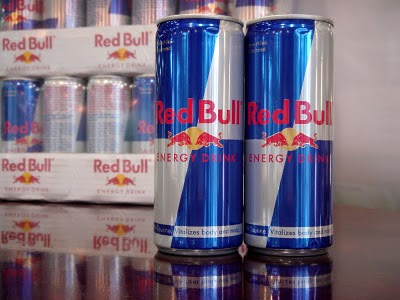 Red Bull gives you wings... if that truly were to be the case, then I would be flying off the chart. I love Red Bull, not because of the caffeine nor because of the energy boost, but simply because of the taste. I’m not a Red Bull addict, but others around me might disagree with me...
I have always liked the taste of energy drinks. The taste is comparable to chewing gum and I’m a true gum addict, so it’s not that strange that I like these drinks. My absolute favourite out of all the energy drinks is Red Bull, not because it’s the ‘A-level’ amongst the drinks, but simply because it tastes best.

I’ve been drinking Red Bull for almost fifteen years and must conclude that the Red Bull in Europe is the best kind in the world. You would think that since it’s all labelled Red Bull, that it all taste alike... well not even close! The ones in Europe, the States, Australia, Hong Kong and (South) Africa are quite similar in taste, but the ones in Southern Asia (Thailand, Vietnam etc.) taste horrible. It’s way more sweet, less bubbly and so not worth to be called Red Bull.

Anyway, the reason for my post about Red Bull is that I’ve been drinking it way too much this last two weeks. People who know me, know that I have sleeping problems. It’s on the borderline towards insomnia. I haven’t been able to sleep properly for weeks, even less than normally. We’re speaking of 1-3 hours of sleep per night for weeks in a row. This is starting to take a toll on my body.

My body doesn’t respond to the amount of caffeine or taurine of Red Bull, but somehow I still drink tons of it, hoping that it will give my body that extra boost. Well... it doesn’t. All that it does do is make my heart rate going up intensely. On top of this, my colleagues now seem to think that I’m a Red Bull addict.

So yeah... It might be best if I start to take better care of myself by cutting back on the Red Bull. Maybe 2-3 cans a day instead of 6-8 cans and several cups of coffee. I just Googled to read about the negative health effects when you drink too much Red Bull... let’s just say that sometimes it’s better NOT to know things.

I will try to do better... believe me, I can go without Red Bull if I have to, but why should I? It’s the amount of me consuming it that is up for debate and this is something I’m willing to change. So don’t worry, you won’t be sending me off to Red Bull rehab :-)
Signing of with Red Bull wings...
Bao-Nhi
Posted by Bao-Nhi at 22:18