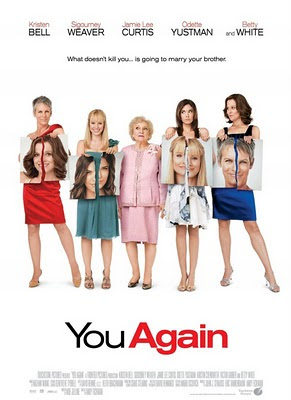 You Again is a very predictable, but cute movie. Ugly duckling (Kirsten Bell) gets picked on by popular mean girl in high school. Fast forward and they run into each other again when pretty mean girl is engaged to ugly duckling’s brother.
This kind of movies have been filmed over and over again so I can imagine why the general rating on IMDb was 5,3. You either love this genre of comedy or you don’t. Well, I happen to love it. I thought it was an okay movie. Not a blockbuster obviously, but fun enough to watch for an enjoyable evening.
This is the second movie that I have seen with Kirsten Bell in it. I like her natural style of acting. I loved her in the series Veronica Mars (still don’t understand why they’ve cancelled that show) and I also enjoy her role as ‘the voice’ of the Gossip Girl series. I think that she’s cut out for (romantic) comedies. It would be interesting to see her in a more serious role. Maybe in the future we'll get to see if she can pull that off as well.
Posted by Bao-Nhi at 15:32